Dehradun:  The draft of the Land Consolidation Bill was submitted by the Land Holding Committee of Uttarakhand to the Chief Minister, Harish Rawat in Dehradun on Tuesday. On receiving it the Chief Minister reiterated that the government would seek public suggestions over the draft of the bill before sending it to the state Assembly for discussion and approval.
The government also stated that it would initiate processes and would take initiatives in making the people understand and be aware about what land consolidation is. The government would also seek suggestions from the general public to make the bill more exhaustive and inculcate any necessary changes needed and that would go on for three months before the bill is placed before the assembly.

The government is keen not to create any disadvantage to any section of the public by its legislature. That is the reason the government is making efforts to take public consent and suggestions before they make the legislation. Along with this the government has also planned to amalgamate the farm lands and wants to make sure that the farmers are at no disadvantageous situation as realty-developers are capturing cultivable-land after the law is passed or formulated, said the Chief Minister, Mr. Rawat. 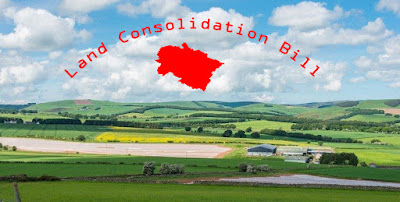 In this context the government is also taking initiatives and is trying to get inputs from the villages of Uttarakhand too. In the first instance the government has shortlisted and identified 200 villages to spread the awareness about the laws of land consolidation, said the State Agriculture Minister Harak Singh. The government will find out ways to get suggestions about land consolidation from villages and the target sections to see that all interests of all the sections of society are being safeguarded.